If you want the thrill of a murder mystery in Auckland for your work party, team building, conference or Christmas party; we have two fun interactive Murder Mysteries to offer. 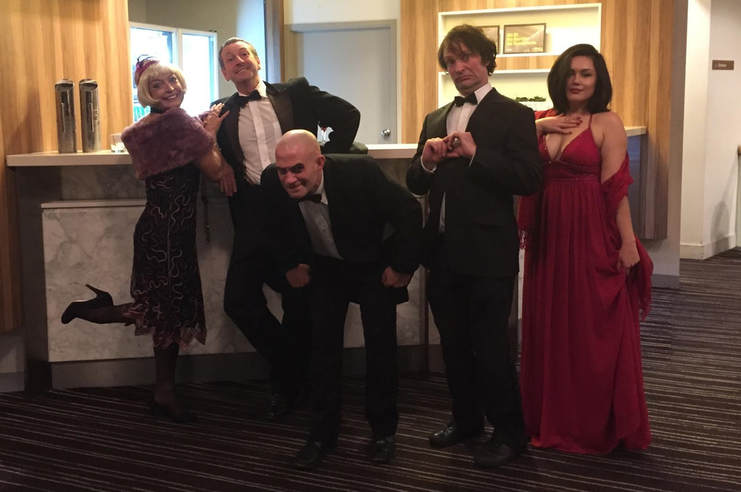 Welcome to a murder, the scene is set, an amateur sleuth, Femme fatal, jealous wife, business rival and a creepy butler…..only one thing is missing; a corpse
*screeeeaam*
–  Set in the 1930’s, guests are encouraged to dress accordingly.
Welcome to a murder... The year is 1930 and you are at the Cottingdale country club. The reason you are here is to see the presentation of Gatters new revolutionary architectural design concept….how ever things are not going to 'plan'.

Lets meet those involved
William Joseph Gatsby - Master Architect
Richard Cornelius Barnshaw - Rival shifty Architect
Sarah Coddington Gatsby - Spiteful Wife of William
Sylvana Natasha Fettuchini - Italian Golf Secretary and a bit of a dish.
Hamilton James Jeffries (Jaffa's) - Bohemian Actor/Magician
Butterworth theButler - Creepy Butler; Need we say more
Something of an odd lot you will agree.
A murder has been committed and it is up to the guests to solve the age old problem of 'Who Dunnit'. There are clue sheets, accusations sheets, odd suspect characters roaming the tables as well as some red herrings...and orange roughies.
This a hilarious fun packed evening spaced between courses with entertainment, song, introductions, a murder, various acted out scenarios, audience participation, question time and improvised comical events. After the main, guests will write down whom they believe the murderer or murderers to be and reasons why. After Desert the winning answer and murder or murders will be revealed…and who will get their just deserts?
The show can be performed during a mealtime or throughout a given time period. It’s a great team building experience too as laughter breaks down all barriers. We come to your venue whether it’s a private home, restaurant or social/service club.
Enjoy a show full of comical events, a great deal of audience participation and a fun time to be had by all… except for the corpse of course!
You'll laugh, you'll cry and maybe...you'll die! Who knew death could be so much fun?
We have been performing these murder mysteries around the country since 1991 and always with great success!

Be prepared for a good laugh…at the expense of the dead
Come dressed to kill
You never knew death could be so much fun
The show can be performed during meal-time or throughout a given time period.
Also great for fun team building like no other team building you have experienced before…laughter breaks down the barriers. If you have formalities to also attend to during the night we incorporate it in to the evening.
We come to your venue; from private homes and restaurants to social and service clubs. Many of the shows characters can be used as meet and greet acts; a great way to start your event.

1920's gangster theme
This Murder mystery uses the audience and there are one or two Gangster facilitators/guides who run the night and add to the fun and frivolity.

You would have a host to create the atmosphere and act the part. The Host is an Entertaining Professional and depending who it is; has written, produced, acted in various shows, acted in film, screen and adds. One has performed internationally as well as being an MC at the Americas cup.

On the night the hosts introduces the Scenario and Each person is given a character; some are main parts but they dont have to act...well than can if they want to. We encourage people to come along dressed as tho they were going to a Gangsters speak easy....lots of fun. We dont have invitations but please read the info about the Murder mystery and maybe create one to your liking.

The Story: “Aiden Abet” the leader of the Tracy Gang developed a scam that netted him $1m. However, once his victims caught on he became a hunted man. The $1m was hidden in the Tracy Speakeasy and when it strangely reappears it leads to murder! Unravel the mystery of the dead man walking, the letters from William Shakespeare and the literary weekend.

Setting: The Tracy Speakeasy a 1920’s gangster lounge owned by the Tracy Gang.
Group Size: 2 to 15, 2 to 60 or 60 to 120.
Costumes: Guests come dressed as a gangster, cabaret dancer, godfather, flapper girl, pimp, cop, F.B.I. agent, scarface, hit man, dancer or any other 1920’s style character.
Background: We are celebrating the success of the notorious Tracy Gang.
Testimonial: We held a Tracy Gang 1920's murder mystery!! Best night we have had for ages. Everyone thanked us for a great time. Hella Oakes
Tracy Gang is a fabulous 1920's gangster murder mystery theme. People love to dress as gangsters, flapper girls, godfather's and hitmen.


Do you have what it takes to be a member of the criminal underworld and the Tracy Gang?!

Format:-
Guests are divided up to form small groups; working in groups to solve the murder helps with people to mingle.
The evening is split into three rounds - each round groups have to complete several tasks to earn clues. At the end of each round, all group members are encourage to trade clues with members of another group.